Posted on February 13, 2012 by steelheadonthespey

Been long overdue for a post and have been doing some thinking about winter flies after seeing some posts on other blogs. These are just some thoughts and ramblings…. 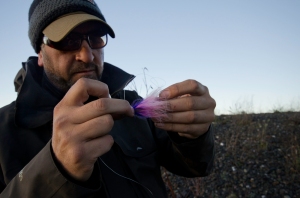 In the last few years, it seems more and more people are out chasing winter steelhead. It is kind of like the “hot new thing to do!” Because of this we are seeing some really cool fly creations from anglers and fly companies. One thing I have noticed is that these flies seem to be getting bigger and bigger. Yes, winter steelhead are aggressive creatures and will take just about anything if the mood presents them, BUT how big is too big? I think it was Ed Ward or Scott Howell who said something about tying intruder style flies so big that the fish would still eat them but it got to the point where they could no longer cast these monstrausities. One of the more commical things these days is seeing all these “new” winter steelheaders out there flogging the water with six plus inch intruder style flies that they cant even turn over, yet think it is the only style fly that will hook winter steelhead. Little do they know, that a scaled down version or something like a string leech might actually increase their hook-up rate because they can turn over the damn thing!

Don’t get me wrong. I love to tie and fish larger intruder style flies because they do work and the grabs can be heart-stopping. Have I tied and fished some huge intruders? Yes, but they are usually tied sparse and I can still turn them over with a six or seven weight spey rod. But, most of the intruder style flies I fish are 3-4″ long, are sparse, and easy to cast. In fact many of the winter steelhead flies I tie and fish are in the 2-4″ length. In my opinion they are plenty big for the fish to see in off color flows and are castable even with large lead eyes or worm weights in front of them. As flows begin to drop and clear, I tend to go to smaller flies or at least more subtle color tones for winter steelhead. While I still love to tie and fish larger flies when the flows get low and clear, I feel that sometimes we might miss fish that do not want that big, gauddy looking thing. Yes, the right aggressive fish will still take the flashy looking fly or big intruder in any given condition but how many fish do you miss that might grab something small?

Early this winter we were presented with low, clear flows on many of our North Coast rivers. For a while, some rivers were seeing very little pressure. Fish were around and were fairly grabby but would also be picky at times. It was not uncommon to see anglers go through a run with a big intruder or string leech and not get touched and then watch a friend go through with a super small boss or comet and hook three or four fish behind someone. This happened on numerous occassions, were the only thing these fish would grab was a #8-10 Boss or Comet. Every once in a while you would get a fish to take a smaller intruder style fly or string leech but most of our good days produced fish on small flies.

This brings me to another situation this winter when I had a client in a run full of rolling fish and we could not get them to take anything. The water was a little high and had maybe 3′ of visibility. We tried string leeches, hosers, and intruders all in different colors to no avail. Our last ditch effort was a #4 Boss and on the first swing, a fish hammered it. I have to say that I was a little suprised but it just goes to show that bigger flies in off color flows are not always the ticket. While I was a little reluctant to fish something that small in these flows, it shows that the fish knew that small fly was there whether it felt a presence through the lateral line or saw it in the off color flows.

So, when is a big fly too big? When you cant cast it! If you are not hooking fish and someone else close by has hooked four fish behind you!

I am by no means saying that small flies are the way to go, but dont forget to have a few in your box for when things get tough and it is time to try something different. Just a little something to think about.

5 Responses to Winter Steelhead flies and a few thoughts